Cataracts is a disease of the eye that results in the clouding of the lens of the eyeball. Cataracts prevent clear images from appearing on the eye’s retina; causing mild, moderate, even severe blurred vision. Watch a short video about cataracts now.

Typically an eye disorder associated with aging (over half of the people in America over age 80 have either had a cataract or cataract surgery), cataracts generally occur later in life as the lens structure within the human eye changes and gets older.

Cataract surgery is the removal of the natural lens of the eye (also called "crystalline lens") that has developed an opacification, which is referred to as a cataract. Metabolic changes of the crystalline lens fibers over the time lead to the development of the cataract and loss of transparency, causing impairment or loss of vision. During cataract surgery, a patient's cloudy natural lens is removed and replaced with a synthetic lens to restore the lens's transparency.

Following surgical removal of the natural lens, an artificial intraocular lens implant is inserted (eye surgeons say that the lens is "implanted"). Cataract surgery is generally performed by an ophthalmologist (eye surgeon) in an ambulatory (rather than inpatient) setting, in a surgical center or hospital, using local anesthesia (either topical, peribulbar, or retrobulbar), usually causing little or no discomfort to the patient. Well over 90% of operations are successful in restoring useful vision, with a low complication rate. Day care, high volume, minimally invasive, small incision phacoemulsification with quick post-op recovery has become the standard of care in cataract surgery all over the world.

The more you know about cataracts, the better prepared you will be to deal with them – or help prevent them in the first place!

At San Ramon Family Optometry, we are able to dianose cataracts and make referrals when cataract surgery is needed. Our office also co-manages patients after they have had cataract surgery. 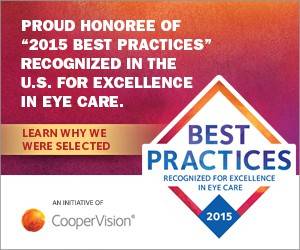 What is the World Sight Day Challenge? Check out this...

...
NEW! We offer an online contact lens ordering website for our current patients. Log onto: https://secure.yourlens.com/DID36497/ NEW! We offer the Macular Risk lab test to identify those with a genetic risk for wet macular degeneration.